ERASERHEAD - How to make sense of it?

Director David Lynch claims that he had a preferred interpretation for his debut feature film - yet, like other filmmakers, has has been reluctant to go into detail. Sometimes, an earnest journalist will throw himself into the fray, resisting ridicule, in the hope of finally solving the question. While the ubiquitous Internet Movie Database has a detailed and accurate explanation for Christopher Nolan's complex Inception - which is under a year old - contributors seem to be at a loss with Eraserhead, even after thirty years.


Eraserhead isn't an easy film...but you might find it surprisingly accessible after reading the following interpretation. It's as close as I've seen to "fitting the facts." But first, let's makes sure we're on the same page.

With so many different interpretations of the film, you might very well ask: do they even matter? Given that there are so many reviews out there, citing varying explanations (including a few that avoid the issue entirely), that some feel justified adopting a more conservative point of view. People read a novel or watch a movie with different artistic and educational experiences, and it's only natural for the viewer to color their observations. For some, Eraserhead is akin to a cinematic Rorshach test.


Aside from Lynch's relatively straightforward Elephant Man, The Straight Story, or maybe Dune, nearly his entire output has some level of obscurity and mystery. Should Eraserhead be any different? Although Lynch suggests there may be meaning for the film, he hasn't been forthcoming with his own explanations (despite numerous interviews).


There's another possibility: Lynch may have intended Eraserhead convey a personal meaning that has less relevance to many audience members. Mainstream films are fairly easy to understand and interpret, but movies with unusual narrative strategies may require a different point of view. Criticism varies considerably in quality, of course, but there's a chance your interpretation of Eraserhead is even more useful and insightful than the filmmaker's.


Personally, I believe that - despite its studied weirdness - Eraserhead does make sense (or at least, a lot more than you might initially think). Still, it's hard to ignore that the film exudes a heady aroma of strangeness. In the absence of wide critical consensus, it wouldn't be a bad thing (at least to start things off) to fall back on a more familiar point of view: that Eraserhead is a black comic, nightmarish film that revels in strangeness and mystery. In fact, mamy film fans are content to enjoy Eraserhead on this level alone.


If, however, you prefer a more comprehensive explanation...well, then you might want to read on.


2. The explanations so far

Attempting to explain Eraserhead is a useful exercise in itself. At the very least, you'll have a basic understanding what other critics and viewers are thinking. While there's a wide range of potential explanations, they fall into a few relatively discrete categories.


- Eraserhead is a commentary on sexual and reproductive mores (Pop Matters)
- A film is about the consequences of irresponsible sex (eraserhead.com)
While you can credibly debate this hypothesis, the film's angle on sex is important but not integral. No question, the film emphasizes the issue of sex and its consequences, but there's a certain amount of material that this interpretation doesn't address.


- Evidence of Henry's, and maybe Lynch's, fear of fatherhood (1000 Misspent Hours, New Yorker)
- Dramatic representation of a fear of fatherhood (The Projection Booth)
Several observant critics picked up on the idea that Eraserhead addresses the anxiety of fatherhood. Indeed, David Lynch became a new father just a year after the film's release. One might convincingly argue that the film reflects the filmmaker's anxiety about being a new father - essentially an artistic treatment of this life-changing moment. (In fact, it would be hard to fully interpret Eraserhead without somehow acknowledging this hypothesis.)


- Eraserhead is a nightmare, jumbled by the illogic of dreams (Electric Shadows)
- A dream rendered through the language of film (Digital Retribution)
Eraserhead has frequently been compared to a dream (or nightmare) by many writers and critics. Eraserhead has less to do with traditional film narrative than the world of dreams and unconscious. While the explanation doesn't explain everything, it does tap into the film's experience for many viewers.


- A horror film intensified by unassociated anxiety (Film Freak Central)
No question, this hypothesis feels right - and few would disagree. However, it seems over-general - the kind of meaning that would be accepted wholesale by someone concentrating more on its weird, nightmarish aspects. This is closest to its interpretation as a classic midnight movie.


3. Narrowing down the interpretations.

It's tempting to regard the film as a surreal trip that indulges in its own weirdness (a judgment that does make sense, on a level). It's certainly nightmarish and disconcerting, definitely dreamlike. Based on these observations, you may choose one of two general interpretations:


The first interpretation is generally accepted, based on the notion that the film has dark, confusing, seemingly disconnected events in a surreal context.  But the narrative remains compelling and entertaining.


The second interpretation is a more radical statement of concept. Shakespeare might have rewritten, "all the world's a dream." To be frank, this rigorous, systematic approach to narrative isn't consistent with the majority of Lynch's film work, but the explanation fits so well that's only fair to include it. This explanation has cinematic precedents, particularly in reference to the great Luis Bunuel; his award-winning The Discreet Charm of the Bourgeosie also has an offbeat humor, and dreams within the dreams fuel the entire plot." Bunuel's film was released in 1972 - just five years before Eraserhead. Lynch was likely significantly influenced by Bunuel's example, and possibly even imitated him in several ways - intentionally or not.


4. Eraserhead as nightmare.
Eraserhead is an unremitting dream (or rather nightmare) sequence - start to finish; the "plot" can only be understood by interpreting it as a dream. Each sequence shows events through the mind of the dreamer. Most of it tells the story of an unexpected birth, and its consequences.


A starry, nighttime sky is superimposed over the image of Henry (John Nance), with this tower of unruly hair (which is strikingly similar to that of the director). His face is shown on its side, as if he'd been resting or asleep, his suit as black as night. A gray planet is in the near distance, but draws closer. Henry's face is unmoving, with a hypnoidal stare. (The image suggests that the face we see is a representation of Henry's inner self.) We pass over the surface of the planet, into a hole, and into a duct. We then see The Man in the Planet (Jack Fisk), whose face is reflected in the broken glass (just as Henry's dream consciousness is a reflection of his waking consciousness). What looks like a disembodied spinal cord escapes from Henry's mouth into the air. The Man in the Planet pulls some gears, and the flagellum-like organism shoots through the air into a muddy puddle. We then follow the camera as it heads into the brightness - where we see Henry's befuddled face.


Henry stumbles across a field and steps into a puddle - not unlike the one we saw a few seconds before. There aren't any people in this post-industrial landscape; it's the landscape of dreams. Eventually, he runs into The Beautiful Woman Across the Hall (Judith Roberts), who informs her that he's been invited to dinner at her parents. What follows is a nightmare-like inversion of an uneasy situation: meeting the parents. Henry shows up at the family home of Mary X (Charlotte Stewart), and greets the rest of the family. A mother dog whelps squealing puppies in the living room (an ironic reflection of Henry's reproductive woes). Henry is to be a father, a new part of the "family." What follows are distorted, sometimes horrific events relating to marriage and childbirth, told through the dark lens of nightmares.

Conveying the plot is tricky, but Lynch has several techniques at his disposal. The movie is filmed in black and white, removing it from color reality. Odd sound effects further isolate us from mundane reality, and move us closer to the world of nightmares.

Eventually, the film climaxes with a burst of white light - ending the "dream." We don't see what happens next, but it's likely waking consciousness.


I don't intend to explain the film scene by scene. I'm sure that Lynch would find it more satisfactory if you were able to try to find your own understanding for individual scenes. The idea of this guide is provide you with a basic template of Eraserhead's design so you can come up with your own conclusions.

It would seem, at first glance, that these two basic interpretations - with their corollaries - may be at odds with one another. In reality, they are only different degrees of the same basic interpretation. There is no "official" interpretation of Eraserhead; it's meant to stimulate your imagination - which is an integral part of the movie-watching experience.
Posted by Steven at 11:46 AM 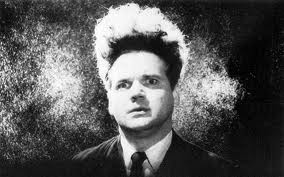